Here is one more Movie Talk which I would like to share with you: Sanjay's Super Team! It is now one of my all-time favorite animated shorts. Sanjay's Super Team is a Pixar short from 2015, and quite honestly, I do not remember this one at all when it came out (it was paired with Pixar's The Good Dinosaur in the theaters in 2015, and quite honestly, I do not remember that Pixar film at all either). Anyhow, I needed to preview a number of religious-related vocabulary words, such as pray to, worship, divinities, and temples (again, very specific upper-level Latin themes), so I was so glad to come upon this Pixar short.

However, a downside of this particular Movie Talk is that Sanjay's Super Team is only available on Disney + for now (it is not currently on YouTube in its entirety). Essentially, the plot is about a boy named Sanjay who loves watching superheroes on TV, but his father says that it is time to take part in a Hindu worship ceremony. Sanjay half-heartedly takes part in the worship ceremony to these divinities, but he really would rather watch superheroes on telelvision. That is where the action ensues!

precari - to pray to

If you have Disney +, there are a lot of Pixar shorts there in its catalog which were new to me, and I am already looking for ways to use them!
Posted by Keith at 12:55 PM No comments:

Once again, like my previous blog post, this may only relate to the teachers in the Latin community, but I hope that other language teachers may find it useful.

So like I stated in my previous blog post, in teaching upper level Latin, we find ourselves having to address some very specific vocabulary, especially words related to war, empire, and imperialism. I shared my Royal Madness movie talk with you which introduced a number of war vocabulary words, and here is another one which addresses many of these words: Sand Castle.

This blog post probably only relates to the Latin teaching community but hopefully other language teachers can use this.

I have been teaching upper level Latin for the past few years, and if you do too, you know that we start to get into some very specific vocabulary themes in the upper levels, such as war, imperialism, Caesar in Gaul, empire, etc. I have also found that there are not a whole lot of school-appropriate movie shorts involving war vocabulary which I can use as movie talks to preview these words - there definitely are a lot of movie shorts out there about war, but they are either overly violent and gory or are WAY too emotional for the classroom (I once did the Robot and the Grandma as a movie talk and was told by students NEVER to do that one again, because it was way too sad!). Finally, however, I was able to find a movie short which I could manipulate to fit those war words which I needed but was still light-hearted: Royal Madness.

in dolore - in grief

in proelio - in battle

In my next blog post, I will share another movie talk which I did following this one which previewed more "war/imperial" vocabulary.
Posted by Keith at 9:54 AM No comments:

As I continue to embark on this hybrid environment of teaching both digital and in-person students simultaneously, I am learning how important formative assessments and observations are in informing me as the teacher how to proceed when for most students I cannot physically witness their progress. My colleague Rachel Ash introduced me to Google Slide manipulatives, and she has demonstrated a way in which students can let me know how well they know their vocabulary: Vocabulary Know-It Boards (look for the specific activity on the page - you can actually make a copy for yourself from her example). 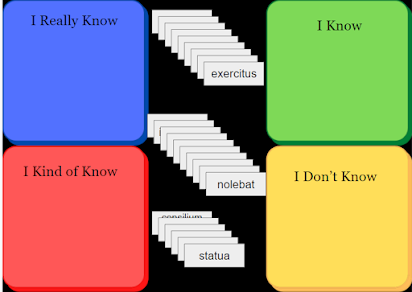 Essentially, from the list of 25ish provided words, students will drag the word to the quadrant which best describes their knowledge of the word: I Really Know It, I Know It, I Kind of Know It, I Don't Know It. 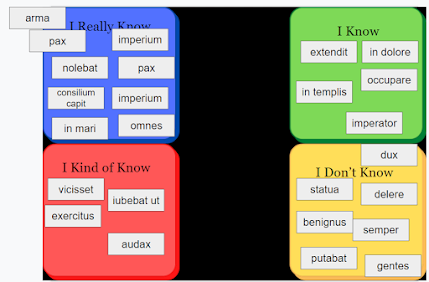 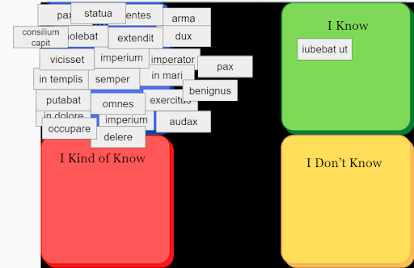 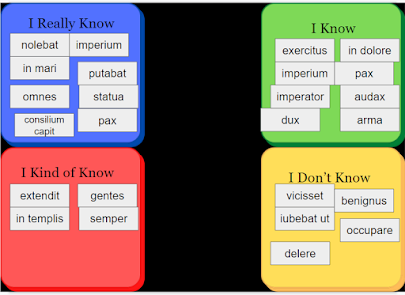 Observations
Posted by Keith at 10:00 AM No comments: