What Did I Do to Make This Story Comprehensible for You?

I have recently returned from the National TPRS Conference (NTPRS), and wow, my mind is overflowing with so much good stuff.

I will write up a post here in a bit about NTPRS, but I wanted to write a quick post about something which I learned at the daylong Coaching for Coaches workshop the day before NTPRS began: After telling a story aloud a’ la CI/TPRS style in the target language, ask students “What did I do to make this story comprehensible for you?” What a simple, upfront way to get feedback from students! This question can be asked aloud, but probably it would be best to do as a written “ticket out the door” type of activity. Notice, the question is not “What can I do better to make the story more comprehensible for you?” Although this is an important question, the idea is to focus on the positive, because so many times even if positives are given, we tend to focus on the negatives. I also view it as if certain things are not mentioned as having made the story comprehensible, then most likely, it was because I did not do it.

Some possible answers to look for (students will probably not use these exact CI/TPRS terms:


At NTPRS, I gave a presentation where I demonstrated what Day 1 of my Latin 1 class is like where I actually begin to tell a story in Latin. My goal is to incorporate every one of the above CI/TPRS techniques, even though on Day 1 none of my students know any Latin (let alone have heard it as a spoken, communicative language). Less than half of the participants who attended my presentation knew any Latin, so the conditions were perfect. After I finished telling the story (I only got through six sentences of the entire story), I asked the participants “What did I do to make this story comprehensible for you?” Now I was not fishing for compliments, because I truly wanted to know what I was doing correct. I was absolutely blown away by what folks had to say! Even though I had deliberately built the above techniques into the lesson, and granted these participants were at an NTPRS conference so they knew what kinds of strategies to look for, it still felt so good to hear that it was obvious to them what I was doing.

So I challenge to ask your students every once in awhile “What did I do to make this story comprehensible for you?” They may tell you something which you did not know what you were doing!
Posted by Keith at 7:04 PM 1 comment:

PreReading for a Classical Text

Under the traditional method, when it came to classical readings, we would give students a text, a dictionary, and say, "Go translate (and good luck, because you will need it)." We would do this, because we were under the impression that students already knew ALL of the necessary grammar and if they did not know a word, they could just look it up. Unfortunately, students would end up looking up probably 80% of the words, and heaven forbid, if it were an idiomatic expression or a phrase needing a note of some kind. The 4%ers could complete the task, but the remaining were floundering.

If you are new to CI and are wanting to use CI methodology, here is an example of how I introduced students to a classical text. A few years ago, I was teaching Latin 3, and I was wanting to expose students to some passages from the AP syllabus, so I chose the scene in Book 1 where Aeneas and Achates first see the city of Carthage being built. I felt that there was enough plot to keep students interested, and that there was a degree of repetition happening to keep it comprehensible.

Because I was still kind of new to CI at that time, I decided to preview vocabulary/structures using a dictation. By this point, my students were very familiar with dictations.

Prior to the dication, though, I had to select which vocabulary/structures which I was going to preview. I decided on the following words:

Day 1
I gave a dictation of the following. See here for directions about how to do a dictatio. The dictation was about three students: Colleen, Ray and Sahil.

Following the dictation, we did a choral reading of the passage to establish meaning.

Day 2
1) I did a review of the dictation with a powerpoint, calling attention to particular vocabulary words. This was done was a choral reading.

2) I then introduced an embedded reading of the passage written in prose (as Nancy Llewellyn likes to call it, an enodatio):

3) I then had the class do a choral reading of this, since this was the first time for them to see it. I asked some comprehension questions and circled in Latin about the passage.

Day 4
1) I gave students another version of the reading, this time as an outline - they read this silently:

2) Finally, they saw the original text:

3) As an assessment, I gave them the following two pictures and they had to label them using the text. In many ways, it was easy for them to do since they had already done a Read and Draw of the prose version. 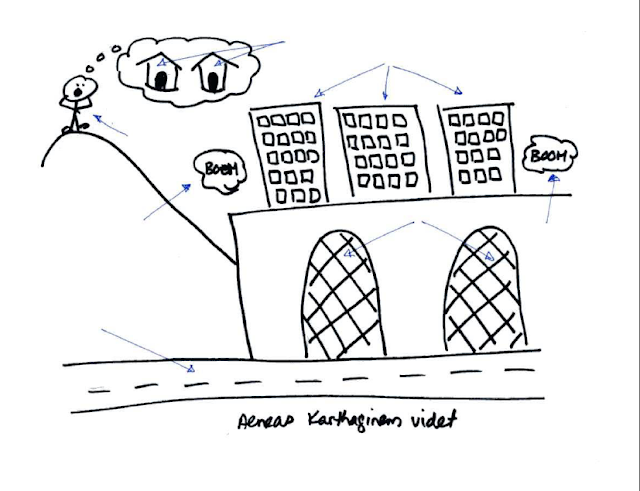 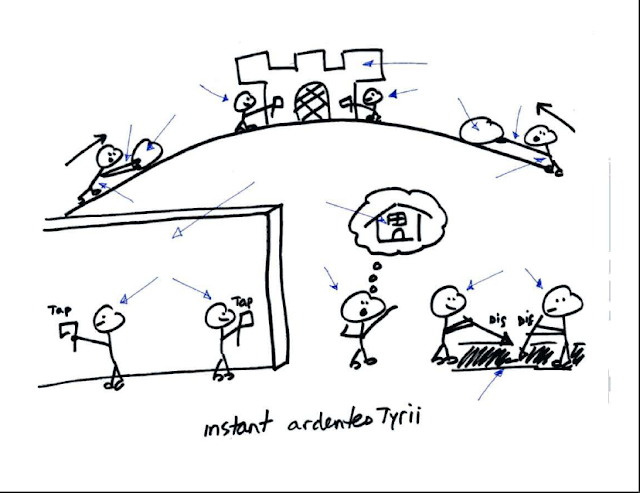 Observations
1) Yes, it took four days to get students to read the original text, but at the same time, they were able TO READ the original Latin by then without really translating.
2) Most students told me how easy it was to read the original, even with the funky dactyllic hexameter word order. My response, "Well, it should have been! You read it multiple times, different ways and you knew most of the vocabulary by the time you got to how Vergil wrote it."
Posted by Keith at 6:08 PM No comments:

Last weekend was the 2015 American Classical League (ACL) Summer Institute, the national conference for Latin/Greek teachers, at the University of Connecticut. ACL (as it is called by attendees) has been a mainstay of my professional development over the years. As I was not able to attend last summer, I truly enjoyed ACL this year, because it gave me an opportunity to reconnect with colleagues and to be in an environment with other Latin teachers.

What I enjoyed the most though was the amount of presentations focusing on the use of CI in the Latin classroom. In the past, there has usually been one-two (at the most) CI presentations at a single ACL conference, but this year there were five! Over ten hours of CI presentations were given:
There was a such a wide range of CI topics presented that it gave attendees an overview of how CI can be used for different levels and for different purposes. Interestingly enough, outside of Bob and me for our PreInstitute workshop, none of us really had consulted each other about what we were going to present.

All of these sessions were well-attended. Based on all of this, here are some observations:

What an exciting time it is for CI among Latin teachers! In fact, at NTPRS in a few weeks, there will be FIVE presentations on CI in the Latin classroom!

I have already started to think about possible CI presentation ideas for next summer's ACL., which will be held at the University of Texas, Austin - hope to see you there!

Post scriptum: The only downside of ACL for me was that I had to attend mostly technology sessions in order to accrue lab hours for my Instructional Technology degree program - not that I did not learn much from those session, but after awhile, one can only see Kahoot demonstrated so many times...