Here is a fun Movie Talk which I did last week. With my Latin 2 classes, I am finishing up the last section of the Perseus myth (the part which deals him with rescuing Andromeda from the monster) which I have adapted, and I needed to preview the words in periculo (in danger) and servat (rescue/save). Once again, using Jason Fritze's National Movie Talk database, I was able to find a Movie Talk which addressed these words in a very humorous way.

The movie short is called Laundry Quandary, and it is about a superhero whose service is needed on his laundry day.

Some random thoughts about sheltering vocabulary but not grammar:

1. Back in February, we were doing registration at my school. One of my Latin 2 students remarked to me how someone in her Advisement class asked her if Latin was easy; her response was "Yeah, it is super easy. We learn words through stories, and then those words appear in the next story along with some new words and then those words are in the next story, and so on. We never have stupid vocabulary lists to memorize. We never have fake dialogues like they do in other language classes. We learn vocabulary through stories and movie clips and through using them in conversation. It never feels like learning." In a roundabout way, unknowingly my student just explained many aspects of CI. I also find it interesting that my student never mentioned anything about grammar in her response, such as conjugating verbs and grammar drills.

2. As I become more versed in sheltering vocabulary but not grammar, I cannot help at times second-guessing myself when it comes to using CI. More than often I feel like I am short-changing my students in terms of the amount of words which they know. Of course, that is the old textbook side of me talking, where vocabulary acquisition was dictated by the lists which the textbook provided (which is usually around 20-30 words per chapter). Then, although I am focusing on high frequency words, I wonder if they are the right high frequency words. There are Latin high frequency lists out there, but they are based on frequency appearance in classical literature - should I focus on that? or on high frequency in language in general? I am still trying to find that sweet spot. I am reminded of the truth that Latin teachers probably know five different Latin words for catapult, but most do not know vocabulary related to themselves or to their daily life in the language.

3. Just recently, Anthony Gibbins, a dear friend of mine from Rusticatio (Antonius Australianus is his Latin name - you may know him better as Legionum, the one who tweets Latin using Legoes), tweeted the following. It is a great example of sheltering vocabulary but not grammar. If you are a Latin teacher who uses The Cambridge Latin Course, then you will recognize the opening sentences. 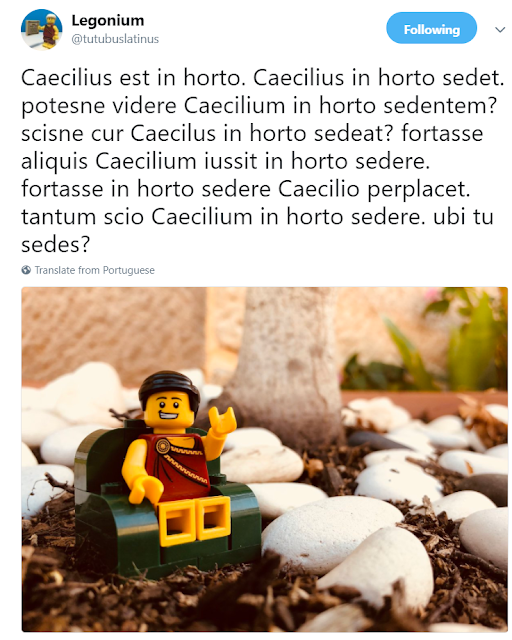 The basic phrase which Anthony uses is Caecilius is sitting in the garden, but look how many different ways grammatically he uses that phrase in the passage. From a Latin teacher perspective, Anthony incorporates a present participle, indirect statements, an indirect question, and some infinitive usage with the verb iussit and the impersonal form perplacet. He then ends it with a PQA.

Now in Latin 1, you probably would not present this full paragraph in the first weeks, but you can see in many ways how naturally you can take students through various structures with known vocabulary. Now you probably would not introduce all of these structures at once but in many instances, based on known vocabulary, new structures are very easy for students to comprehend based on context. I have found that present participles, indirect statements, and indirect questions are very quite easy for students to comprehend. We teachers are the ones who made them difficult for students, because we get caught up in teaching sequence of tenses, formation, stem change vowels, naming structures, making students parse the forms, etc.
Posted by Keith at 10:05 AM No comments:

I have been thinking a lot about Jim Wooldridge's (Senor Wooly) opening address from last summer's IFLT, where he spoke on "Embracing Inauthenticity" (I list his main points here in my post about IFLT. You can also find a blog post on the Fluency Matters website about Jim's talk). Unfortunately, I have not been able to find any recordings of Jim's talk, but I have found a vlog posting of his from 2012 which touches on some of what he addressed in his IFLT talk. The title of this particular vlog post is "Sr. Wooly vs. Native Speakers." I highly suggest that you take a look at it and that you consider what he has to say.

With the publication of many CI Latin novellas which are now available, there has been much discussion in the Latin teaching community regarding the level of Latinitas in these novellas, i.e, how well does the language in these novellas reflect authentic Latin. There has been much debate over specific word choices and whether these words are found in classical literature (for the record, Latin literature spans THOUSANDS of years, not just the classical period. Does this mean Medieval or Renaissance Latin is less because it is not classical? In keeping Latin to a specific time, are we stating that Latin is different from other languages, because it is not allowed to change or to develop over time? Enough of my soapbox).

While I will leave that debate for those who are more well-versed than I am (or for that matter, those who care to debate it), it does bring up an interesting point: How authentic is the Latin which I speak? I consider myself an Intermediate Mid-High speaker of Latin. I have attended numerous Latin immersion events (called Rusticationes) sponsored by SALVI, and although I would love for the Latin which comes out of mouth to flow perfectly in terms of nuance/aspect (proper word choice), perfect grammar choice, and sentence length. The truth is that it does NOT AT ALL.

In many ways, for me, it comes down to the purpose of language: communication. Recently, I saw this on Twitter, and this simple message spoke volumes to me (as a Sesame Street fan, I will say that it is "Mr. Hooper," not "Mr. Cooper"): 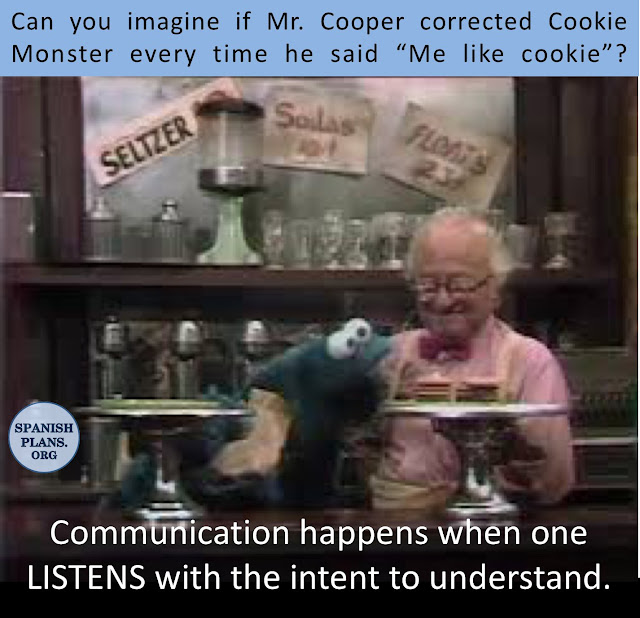 I have heard prominent Latin speakers say "You should not say anything in Latin unless it is grammatically correct." Although I can understand the mindset of those saying this, I must completely disagree with that statement for this fact: if that were the case, I (and probably most wanting to try speaking Latin) would never make an attempt at saying something for fear of being incorrect and judged. As Jim Wooldridge states, this also communicates the idea that speaking a language is only reserved for those who can do it 100% correctly and that only those who can do it have a right to speak it. I would NEVER tell the ELL students in my classroom to not utter a sentence in my class unless it was 100% correct in English. All that matters to me is this: am I able to understand what they are saying even if it is not grammatically correct in English?

For me, this is why i so enjoy attending SALVI events like Rusticatio: I can be inauthentic with my spoken Latin, i.e. it is not going to resemble authentic Latin at all. That does not mean that I am not striving to be more correct and proficient in my speaking ability, but as an Intermediate speaker, inauthentic is where I am at. Most importantly, the attitude at a Rusticatio is that THIS IS OKAY because of my ability. In fact, SALVI prides itself in this, calling its programs "the safest introduction for spoken Latin on the planet." One of my favorite all-time quotes from Rusticatio is from Nancy Llewellyn's opening talk in English about what to expect for the week:


"(When speaking Latin here) you are probably going to make the same grammar mistakes that if your own students were to make it, you would skin your knees racing to grab a red pen in order to correct them."

Yes, at Rusticatio, I am receiving authentic input from those more advanced speakers, but my output is going to be inauthentic probably in the moment. I am so okay with embracing my inauthenticity, because I am taking ownership of the language at the level where I am at. I can also say that I have come a long way in my speaking ability from 2010 when I had never spoken Latin before.


So I encourage you to view Jim Wooldridge's vlog called "Sr. Wooly vs. Native Speakers", and tell me what you think.
Posted by Keith at 11:18 AM No comments: