Once again, this is a post-reading activity which I learned from Annabelle Williamson (LaMaestraLoca) at IFLT this summer. It is actually an incredibly easy and quick activity to create (outside of cutting lots of sentence strips) and to facilitate. It will involve at least three different readings, with which your students are very familiar.

This year in Latin 3, we have started the school year by beginning to read Andrew Olympi's novella Perseus et Malus Rex. Here is my lesson plan for the prologue - this also contains a lesson plan for how I previewed vocabulary and prepared students to be able to read the prologue - it is with Andrew's full permission that I post the entire prologue here on my blog:

Previewing Vocabulary for the Prologue
Day 1

This is an activity which I learned from Cindy Hitz, and it is a great higher-order thinking, post-reading activity involving word clouds. In the past, I have normally used word clouds as a vocabulary highlighter game or have students predict what they think is going to happen in the story. Cindy takes it to the next level and uses the word clouds as part of a cloze sentence activity. So instead of calling out individual vocabulary words where students race to highlight words, now you read out cloze sentences from a reading, and students race to highlight the missing word in the word cloud.

You can find directions for this activity here on Cindy's blog at the bottom under the heading "Game Smashing with Word Clouds."

Example - this is based on the Monster and Dumpling Movie Talk: 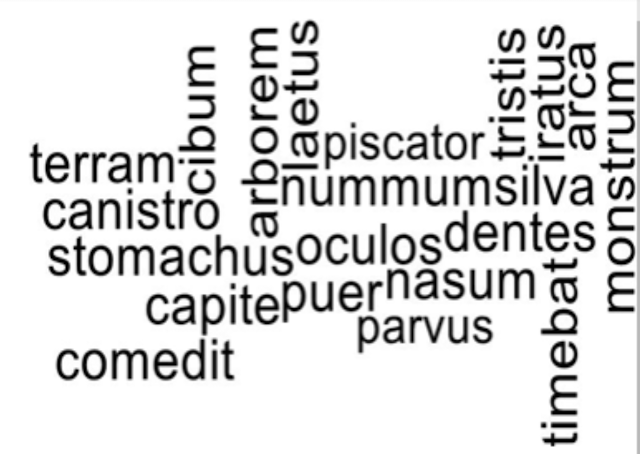 Why You Should Consider Attending NTPRS or IFLT in 2020

NOTE - I am only addressing NTPRS and IFLT in this blog post, because those are the two weeklong conferences which I have attended and on which I can speak from personal experience. Any omission of other weeklong CI conferences should not be taken personally and does not reflect my feelings for or against them. If you would like to write a guest blog post about another weeklong CI conference such as Agen or Express Fluency, contact me.

Although summer is now over and school is back in session, I write this blog post to challenge you to consider attending a conference like NTPRS or IFLT in the summer of 2020. If you have never attended weeklong CI conferences before, you will not be disappointed in what they have to offer. This is not to say that one cannot learn from a 1-2-day regional conference like TCI Maine, Mitten CI, or CIMidwest. Receive CI training wherever you can and as often as you can! And while online groups, professional learning communities/networks, and blogs are so important to the CI community, they can only go so far.

However, in my own experience, all I can say is that there is absolutely nothing like the weeklong concentration of being in a full CI training environment which you do not experience in a 1-2 day conference. I cannot explain what it is. Maybe because one has a week, there is more time to be immersed in a CI environment and to learn and to experience it all. Maybe because since pedagogically everyone there is on the same page, one is not constantly having to defend one's use of CI. Maybe it is the coaching sessions where one can be coached on a particular CI skill in a positive setting. Maybe a week gives participants time to ponder over, to process, and to experiment at a slower pace, since there is ample time to do so, as opposed to a single day at a training where everything is thrown at you at once. Maybe it is the overwhelming amount of practical sessions addressing CI implementation in the classroom. Maybe it is the tangible care and enthusiasm which the presenters, coaches, and leaders exhibit in creating such an accepting environment. Maybe because it is so much dang fun!

Although each summer I am a regular attendee at the American Classical League Summer Institute and as much as I look forward to the professional camaraderie of being with other Latin teachers from around the country, honestly, I cannot say that I walk away feeling pumped to return to my classroom when it is over like I do when I attend a NTPRS or IFLT. That is not to say that I do not enjoy attending the ACL Summer Institute, but the conference just has a different focus for me. I do appreciate though that the number of CI sessions at the ACL Summer Institute has increased each year and that we seem to have reached a critical mass in the CI movement in the Latin community.

This past July, I attended IFLT, and even though I was there wearing many different hats (sub-cohort leader, coach, and presenter), I got SO MUCH out of the conference! I cannot tell you how much I learned that I already have used in these past five weeks with students. If you have read my past few blog posts, they are all related to ideas which I learned at IFLT this summer. I attended a session where when the presenter saw me come in, she said, "Wow, what are you doing here? You know all of this." I responded, "That does not mean that there is still not more for me to learn." And yes, I walked away with so much from her presentation that I am now implementing in my classroom. Compared to the summer of 2018 where I did not attend a NTPRS or IFLT and felt "flat" entering the school year, this year already after five weeks with students, I am still SO pumped and jazzed to be in the classroom. IFLT so charged my CI batteries!

So which one is better: NTPRS or IFLT? I cannot answer that, because they are both different. In my opinion, one is not "better" than the other.
The downside of attending a weeklong conference like NTPRS or IFLT is that it is not cheap when one starts to factor in the price for registration, travel, food, and lodging costs. That is why I encourage you start thinking now about attending. Find out if your school/district will pay for you to attend. Look into scholarship opportunities with your local/regional WL organizations.

2020 dates for NTPRS and IFLT
So I encourage you to consider attending NTPRS or IFLT next summer. I have attended both conferences before. My blog posts on having attended each:

I look forward to seeing you next summer at one of these conferences!
Posted by Keith at 9:13 AM No comments:

The Unfair Game/Give or Take Game

In online CI groups and in social media, there has been much talk about the Unfair Game over the years. For some reason, I never investigated what this game was, although folks were praising it as a fun activity for students. This summer at IFLT, Martina Bex talked about the activity with our cohort, and suddenly I realized that I already knew what this game was - I just called it something different!

I have always called the game "Give or Take," but I like the title "The Unfair Game," because that so describes this game. Here is a link to the directions which Martina Bex has written up for the activity. However, I have always used it with a PowerPoint that has a grid with hyperlinks. The game is still played the same way but now with a visual. Students will pick a number from the grid, and the point total is revealed using the hyperlink. Although it is a generic grid and I have to write in new questions and answers, I can re-use the basic template.

Give or Take PowerPoint example