This semester, I am focusing on having students do free writes for their writings. Previously during a normal face-to-face teaching setting, I would have students retell the particular story in Latin which we had been going over for that unit by writing it down in a composition book. Since we had reviewed the story so much as input, writing would be a natural way for output to occur. However, in this digital setting and having students type out their writings of the stories on a Google Document, I soon found that many students were just copying and pasting from digital copies of the story which were already on Google Classroom from previous assignments and submitting that as their writings. As a result, I decided to focus on free writes, where I give students a prompt for them to complete, and their job is create a sequel to the story on their own from that prompt.

Now if you are familiar with Latin, the first thing which I am sure that stands out to you is the SHEER AMOUNT of grammar and spelling errors! And I am certain that for many of you, it is very PAINFUL to read. However, if I view these writings through the lens of a sympathetic reader (an ACTFL term), then wow, these students are communicating in the language! Even though these are Latin 3 students, in terms of language acquisition, knowledge, and grammar control, they are novice-high/intermediate-low writers. If my students were children learning their first language, they would be equivalent to 2-3 year-olds. As a result, their language is going to be incredibly MESSY! To use an example from Bill Van Patten, when a 2-year old says, "Mommy go bye-bye," do you correct that child's grammar and choice of vocabulary? Absolutely not, because you as a sympathetic listener know exactly what that child is attempting to communicate. That child is piecing together whatever vocabulary has been acquired to communicate. You can try to correct that child, but we know that the child's language will improve over time with more input and exposure.

I have used this illustration before, but it is so true! 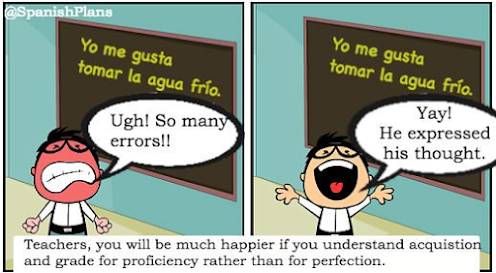 Why can I relate to the above illustraion? Because the first time I truly spoke Latin in 2010 at Rusticatio, a weeklong immersion event, everything that came out of my mouth was in the nominative case and in infintives. Keep in mind, I have my Masters in Latin, but when it came to truly speaking in Latin for the purpose of communication and conversation (something which I had never done before), I was a novice - a very LOW novice. My grammar was horrible! Case endings, verb endings, and subject/verb agreement went out the window, because all i could do was just get vocabuary to come out of my mouth - any vocabulary!!

I love Nancy Llewellyn's quote which she traditionally gave in her opening talk at Rusticatio:

You are going to make the same kinds of grammar errors that if your own students were to make them, you would skin your knees running to grab a red pen to correct them. So be patient with yourself.

That was ten years ago. I can say that I am probably an Intermediate High level speaker now, but I still definitely struggle trying to put it all together with correct case endings, subject/verb agreement, correct usage of subjunctives, noun/adjective agreeement, pronunication, etc.

So when getting students to write in the target language, be sure that there has been plenty of input first so that there is a natural overflow of output, but be prepared for it to be messy. However, if you are viewing the output from a proficiency viewpoint instead of a performance lens, you will be amazed by what students are attempting to communicate in the language.

The following video describes how I feel about my current teaching situation:

Do you feel like this? That administrators, politicians, and parents want teachers to teach digitally/concurrently but yet no one knows what this means or looks like? But yet, we keep being told to teach this way?

I cannot believe that I have been doing concurrent/hybid teaching for the past 6 months now. Throw in the two months of shelter-in-place from last year, and I have been teaching in a digital environment for roughly 9 months. At the same time, I am trying to keep perspective. Yes, this is not at all an ideal situation. Yes, I have no training in this hybrid/concurrent situation. Heck, I have never lived through a pandemic before.

I can place blame on district leaders, students, parents, politicians, anyone, etc., but big picture: there is only so much which I can control in all of this. What I can control though are my reactions and how I personally deal with the situation. As a result, I need to celebrate my victories no matter how small or insignificant you may think they are, because these truly are positives:

So what have I learned about digital teaching in all of this? I can definitely say that my views have completely changed over the past months.

I am currently taking a district-level, learning management system professional development, and one of our assignments dealt with creating a digital lesson demonstrating concept attainment/application/prediction (yes, very Educationese terms) which would use with our students. Rather than invent and learn a new web app tool, I decided to revise/adapt an already existing strategy to a digital setting: Word Clouds.

I am introducing a new reading with students, so I created a word cloud for students involving words which would be in this passage (see here for how to create a word cloud using MS Word). Based on the word cloud, students are to predict what they think will happen in the story which they will be reading soon.

In creating the word cloud, I found using Dark City color format was easier for students to distinguish the words. I also set the layout to Horizontal.

Why respond in English and not in the target language? Because this is a prediction activity using vocabulary, I need for them to respond in English to demonstrate comprehension of those words. If I asked them to respond purely in the target language, I would get students who would put the Latin words together to form a sentence, but if the sentence were not to make any sense, I would not know why: did they just throw Latin words together just to complete the assignment? Did they not understand the meaning of a particular word which then impedes my comprehension of what they wrote? What if students just created a sentence which was all nouns or all verbs? By having them respond in English, I can at least tell that students are demonstrating comprehension of the given vocabulary words. 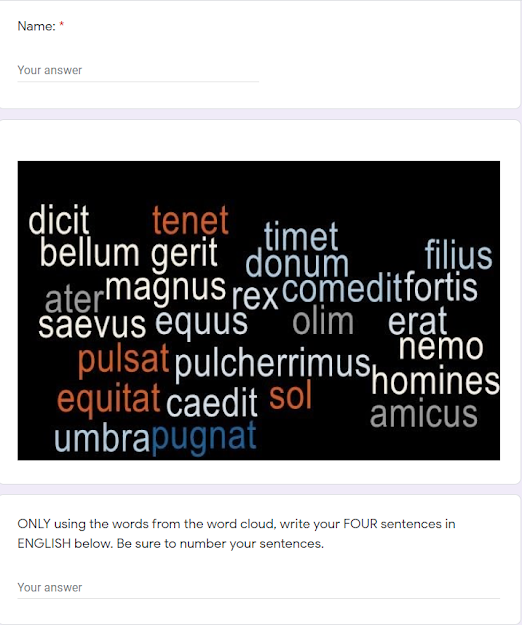 Observations
Posted by Keith at 9:45 AM No comments: