My friend Justin Slocum Bailey has a TON of CI resources posted on his Indwelling Language website. Just recently, I have been using many of them in my Latin 1 classes, and quite honestly, I do not know why I waited so long to use them.

For the past few weeks, I have been using Justin's idea of using pictures to generate language. He has a GREAT post here with directions and links to picture websites. I have been using many of these pictures in Latin 1 as warmups in order to give students more input of the language and for students to respond with "output."

Lately, I have been using optical illusion pictures where students have to find "how many of X" are in the picture. This is a GREAT way to get in repetitions of cardinal and ordinal numbers in a MEANINGFUL context. Although I could simply teach students to count to X in Latin (boring), when using a context to teach numbers, it is a lot more personal (and we know the value of personalization in a CI classroom!).

Recently, I used the following picture (note - this picture required me to know the names of animals in Latin): 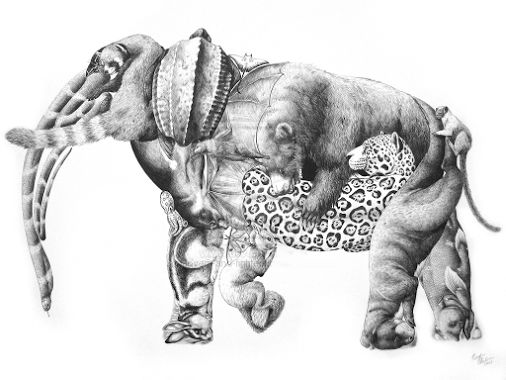 I simply opened by asking my Latin 1 classes "Quot animalia in pictura sunt?" (You can also ask "Quot animalia in pictura videtis?" to change the language structures). Students will most likely call out numbers in English - I am fine with this, because I will then recast their answers in Latin. If you do this enough, students will start to call out their answers in the target language. Once I figured that students had reached their answers, then I began to explain the picture in Latin and to point out the various animals. Example:

In using these types of pictures, I was able to get in LOTS of repetitions of cardinal and ordinal numbers simultaneously in a meaningful context. Do I expect them to remember the cardinal and ordinal numbers in Latin immediately after this and to be able to recite them? Not really (although my high-flying students may be able to), but that was never my goal per se - my goal was to deliver understandable messages in the language.

Observations
P.S. For the record, there are 15 animals in the above picture, 16 if you count the "elephant."
Posted by Keith at 5:20 PM No comments:

The following is the Latin lesson plan which I created based on the Short and Sweet Movie Talk from the previous blog posting. Once again, I thank Lauren Watson for sharing some of her ideas with me! I have also included English versions so that you can adapt it for your own target language.

Yesterday, Bob Patrick, Lauren Watson, and I were invited to give a 1/2 day CI in-service at a neighboring county about an hour away. Bob, Lauren, and I have given numerous CI in-services in our own district, so we felt very honored to have the chance to visit another district to share our CI knowledge (in fact, a teacher in that district asked us to come, because she found our names through Martina Bex's database of CI teachers - thanks, Martina!).

I always love giving presentations with Bob and Lauren, because I get the chance to learn so much from them during their demos. Lauren teaches French, so learning some French via CI is ALWAYS helpful, because I get to experience her demo like a student. Yesterday, Lauren's demo was a Movie Talk in French, and I really liked what she did...so much that as a result, I actually typed it up in Latin and did it today with my own Latin 1 classes. It is with Lauren's permission that I share her Movie Talk with you here.

The Movie Talk is called Short and Sweet, and Lauren used it to introduce words such as boy, girl, loves, big, small, not, sad, says. It is actually very short, but you can do SO much with this. I was actually surprised at how engaged my students were in watching it.

Thanks, Lauren - my students really enjoyed it.
Posted by Keith at 2:13 PM 4 comments: