I am currently at IFLT at the moment, and literally 30 minutes ago, I had a conversation with one of my absolutely favorite people in the world, Annabelle Williamson! Annabelle teaches a Spanish language lab for elementary school students at IFLT, and I LOVE, LOVE, LOVE watching her with those students, because I learn so much from observing her (as well as some Spanish). Anyhow, I told her that I had stopped by her lab briefly to see what she was doing. She then asked, "Did you see [the students] play your Seis game? I do something different with it." (The Seis Game is the Sex Game in Spanish. Again, in Latin, the word "sex" means "six"!!!). Immediately that got my attention, and Annabelle then showed me what she does with the game - I ABSOLUTELY LOVE THIS IDEA, AND I AM NOW GOING TO DO IT THIS WAY!! I just had to blog about it immediately!!

So the set up of the game is still the same involving dice and a text. The rules themselves have not changed, i.e., students will roll a dice and if they roll a six, they begin writing. However, the difference now is in the worksheet given to students. The way I learned it was to give students sentences in the target language from a known/seen reading, and the goal was to translate the sentences into English as quickly as possible. Annabelle has turned the activity into a reading game instead of one based on translation - she has the story written out for students but now it consists of a cloze sentences with a word bank at the top! So now when students roll a six, they have to pick the missing word from the word bank to complete the sentence and will continue to do this with other sentences until another student rolls a six and relinquishes control of the pen/pencil. Annabelle said to me, "Now it is a reading activity, because students have to read the sentences to know what word is missing." 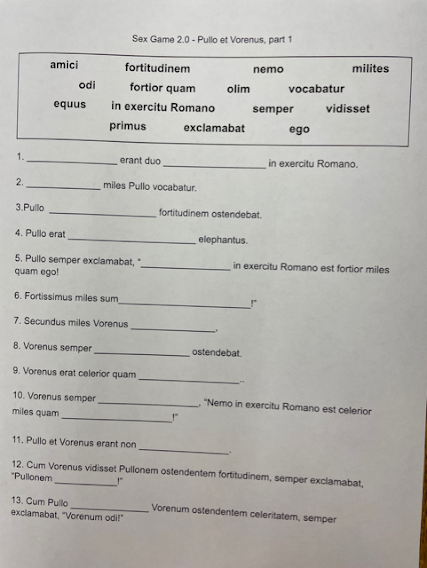 I am loving this change to the Sex Game, because:

So consider using the Sex Game 2.0 version with your students - there is nothing wrong with the original version, and I will still continue to use it. I would love to hear how version 2.0 goes with your students. Thanks, Annabelle!!
Posted by Keith at 1:27 PM