With the year coming to an end, as I have seen on other blogs, let me list for you my top 5 posts for 2015 (those posts which received the most page views):

Once again, I am overwhelmed by the fact that so many people are reading my blog. As I have said, there is nothing really special about me as a CI teacher. There are so many others out there who have such a deeper knoweldge of CI than I do and are implementing CI with better results than I am. I am humbled though that many of you feel like I have something to say on the matter.

So now that my semester has ended and that I am officially on winter break, I am going to take a two-week hiatus from this blog. I hope that you all will take a much deserved break and enjoy you time away from the classroom.

To quote Luke Henderson who expresses it so eloquently in Latin in a tweet from today: 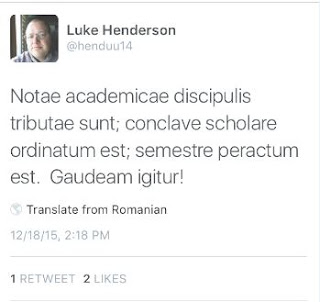 Rough translation: Grades have been given to students; the classroom has been arranged/set up; the semester has finished/come to an end. Therefore, let me rejoice! (Something gets lost in the translation, as the English really does not give justice to his sentiments. It is expressed so much more eloquently in Latin than in English).