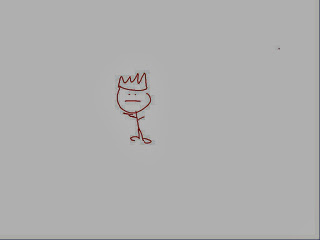 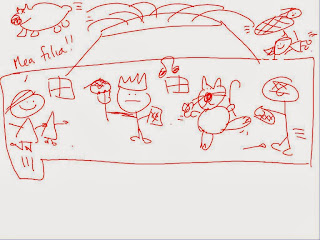 As this semester is coming to a close, I now have time to reflect on how things have gone for me with CI these past 4 months.

After attending SALVI's Pedagogy Rusticatio and two other CI workshops this summer, I was very eager to incorporate it into my classes. But there were a few slight problems: I was only going to be teaching Latin 2, Latin 3 and AP Latin this year (and for the record, I do not do CI with my AP class, since the AP syllabus is so grammar-translation driven), so no chance of starting on the ground floor with Latin 1 students in introducing CI to a group who did not know language learning any other way; also, I myself had not taught 3/4 of these students in my classes, and in fact, about 1/2 were coming from a pure grammar-translation approach and had never encountered Latin as a true communicative language. The big question on my mind was this: I am already going to be viewed as the "evil step-parent" since the majority of these students have not had me before as their teacher, but will CI push them even further away from me since it will be such a drastic change from what they are accustomed? How much resistance will I encounter?


I decided to do the following: simply love them where they were at, and introduce CI to them very SLOWLY. And indeed, it worked. They truly began to warm up to it. In the beginning, it was quite an adjustment for all of us, but since the basic tenet of CI is to deliver understandable and meaningful messages in the target language, it worked perfectly, because my goal was to make sure that EVERYONE understood what I was saying in Latin and if not, to make modifications on the spot. Over the semester, I gradually incorporated TPR, TPRS, circling with balls, PQA's, asking a story, read/discuss, read/draw, embedded readings, dictations, one word picture, timed writes, micrologues, etc., until these became part of the class culture. Most importantly, we got there together.


For their performance exam, I had students do an evaluation of their timed write portfolio and of their overall progress for the semester. These students had never written anything in Latin prior to August - here is what some students wrote about their experience this semester, particularly with timed writes (NOTE - names have been changed)

"When i started Latin 3, I could barely translate the passages in the book to English without looking up half (of) the words in the dictionary. These writings forced me to write  passages which helped me improve my grammar and build vocabulary."

"Before this year, we usually stuck to straight translation but read/draw, micrologues and actually speaking the language in class has helped become even more comfortable with the language, especially when I am reading it. Translation has also become easier because I now better understand how the very sentences are pieced together and the grammar of them."

"At first, I was uncomfortable having to write instead of simply translating. As the semester went on, my writing has become more and more complex, and I feel like I am honestly walking away from this semester with a greater ability to write in Latin."

A few months ago, my friend Evan Gardner (founder of "Where Are Your Keys?", a language acquisition system heavily based on CI) had asked those who had attended Pedagogy Rusticatio if we would go back to how we taught five years ago. Quite honestly, I would do it in a hearbeat, because that old way is familiar to me - I could "phone it in" five years ago. CI is hard though and can be quite unpredictable. But I also see that CI is what is best for students, and one of my purposes of this blog is to share how I have seen this work for them.
Posted by Keith at 8:15 PM 1 comment:

Getting Started with CI

Whenever people ask celebrity environmentalist Ed Begley Jr. how they themselves can begin to have a lesser impact on the environment, he always responds, "Pick the low hanging fruit first. Do those things which are easy to do, such as recycling, buying low-energy lightbulbs, taking cloth bags with you to the market instead of using plastic bags, taking the bus to work, etc. Once you master those activities and they become part of your daily habit, then move onto bigger things."

I think the same can be said about using CI in the Latin classroom. So many times, we do not know where to begin with it all, and it can seem so overwhelming. And yes, considering how much of a “game-changer” CI is compared to the grammar-translation methodology from which we Latin teachers learned the language, the whole undertaking can look rather daunting.
Using CI in the classroom involves you as the teacher speaking Latin with your students, but keep in mind this most basic tenet of CI: deliver understandable and comprehensible messages in the target language, as this is how we acquire language itself. I heard at ACTFL a few weeks ago that parents have a 100% success rate in teaching language to their children, because they speak to them in an understandable manner; parents do not get caught up in teaching grammar to their children but rather speak to them at a level which they can understand. In other words, when speaking Latin to our students, it is not necessary for us to be fluent in the language per se, rather just understandable and comprehensible. What an absolute relief that is!
So if you have never used CI in your classroom or even spoken Latin before, a simple way to begin is to ask basic comprehension questions in the language. Create a simple sentence in Latin or pick one from a reading; if the sentence contains words which students do not know, then write both the Latin word and English meaning on the board in order to establish meaning. Say the sentence aloud in Latin to the class (write the sentence on the board, if needed). Now ask questions in Latin about the sentence (write the Latin interrogatives with the English meaning on the board as a reference), and require a choral response from the class in Latin. Example:
Cerberus est laetus canis et in villa currit.
To "spice" things up some, you can throw in some "yes/no" and "choice" questions
Every once in awhile, do a comprehension check in English by simply asking the class, "Now what did I mean when I said __________?" This will help establish meaning and allow you to see if indeed students are understanding what you are saying in Latin.
Once you get the hang of simple questioning, then you can start veering away from the sentence and asking students to think "outside" the sentence.
Once you really get the hang of questioning, you can now begin using Personalized Questions and Answers (PQAs). It may require writing more vocabulary on the board in order to establish meaning for students.
As my friend and fellow Rusticator John Kuhner is accustomed to say, "The goal is to put Latin into the ears of your students, no matter how small." Asking simple questions in the target language with limited vocabulary allows students to interact orally/aurally with the Latin language, which is how they will in turn begin to internalize the language. All of this takes time though - even asking comprehension questions can be overwhelming if you dive in too quickly.
Asking simple comprehension questions in Latin is an example of some CI “low-hanging fruit.” If you have never done it before, go pick it!
Posted by Keith at 5:26 PM 1 comment:

What the Heck am I Thinking?!!

Honestly, I am the last person who should be doing a blog, let alone one on Comprehensible Input (CI) in the Latin classroom.


Although I have been a Latin teacher for over 15 years now, I can count on one hand, or more specifically, on one finger the number of semesters which I have been exclusively using CI in my classes. For the past 5 years or so, I have been dabbling/using TPRS but that was the extent, and I never really had an end goal in mind for students when I was using it. To me, TPRS was just a great way to teach vocabulary in an interesting way - who does not like a good story? But outside of that, I never ventured past anything else with CI. I continued to focus on teaching explicit grammar and made sure that I completed all of the required chapters in the book.
For the past 4 months, however, I have dedicated myself to teaching Latin using CI. This past summer, I was fortunate enough to have attended THREE separate workshops on CI in the Latin classroom, led by fellow Latin teacher and friend Bob Patrick. Of course, this has required a MAJOR shift in my pedagogy, and I am still trying to figure it all out, but wow, I am seeing results with my students like I have never before.
Which brings me back to my original opening statement: who am I to start a blog on using CI in the Latin classroom, when I myself am trying to figure it all out? A few reasons:
1) There are only a handful of pedagogical blogs dedicated to CI in the Latin classroom. And let me say, they are all excellent, but part of me feels the need to add my voice in all of this.
2) I want a place to storehouse CI materials which I have created. I have shared a number of resources which I have created with other Latin teachers online, and after awhile, I forget what-I-have-shared-with-whom or who-wants-what. It would be much easier for me to put everything into one place, and folks can take what they want, alter it for their own purposes, etc, if they want.
3) I want to share and dialogue with other users of CI. I have enjoyed gleaning much CI wisdom from many blogs out there and would like to continue that dialogue.
4) I want a place to share my own experiences, victories and failures with CI, especially with other Latin teachers who are using CI. CI is starting to gain some momentum in the Latin classroom, and I want to be part of this movement.
So here then I resolve to discuss my "journey into CI" with all of you. I have no idea where I am going with all of this or to where this path will take me, but gosh, it is all pretty exciting. Here's to the journey!