This is a great listening comprehension activity which I learned a few years ago at an ACL Summer Institute. It will require whiteboards - in my experience, I have found that students love any activity involving white boards. It is very similar to a dictatio but instead of students writing down the sentences, they will draw it.
An example of a Freeze Frame picture and description: 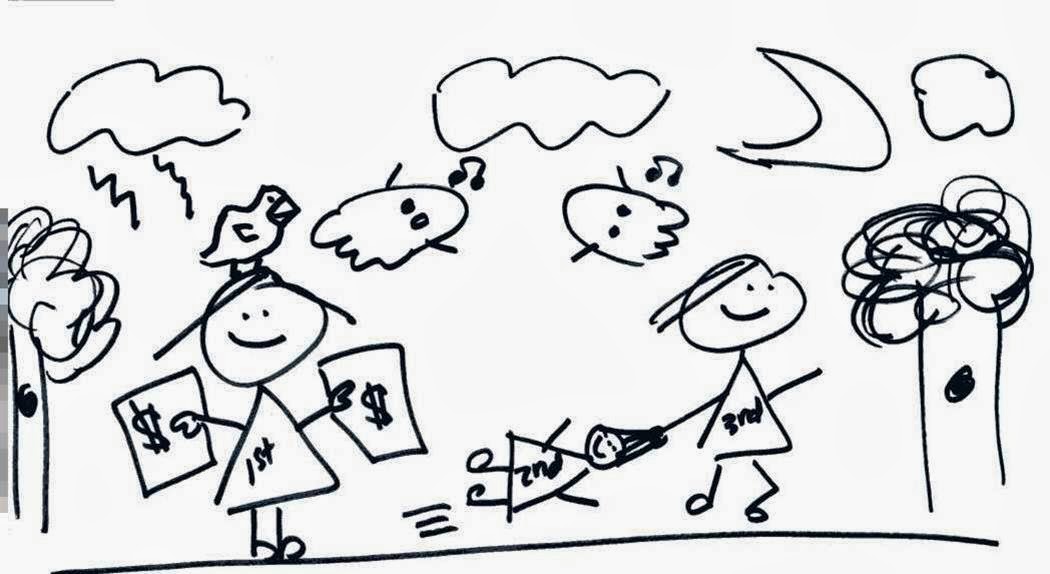 When I first heard about using dictationes in the target language with students, I had my immediate doubts purely because of what the activity was: it was a dictation exercise. What benefit could students gain from hearing me read sentences aloud in Latin and from writing them down word for word? To me, it sounded incredibly boring and not very interactive or engaging for students.


I, however, decided to give it a try and am now convinced of its benefits. This is now how I begin a new chapter. Here is how to do a dictatio:

6.  After we complete the entire dictatio, I collect them and then I project the sentences again
on the board, and we do a group choral translation of the dictatio in order to establish
meaning.
7.  I do take a look at the dictationes afterwards but since they are self-corrected, I do not have
to do anything other than verify that students either corrected their sentences or wrote the
word optime and then enter their grade in my gradebook.
Observations

An example of a dictatio (stage 17 CLC)

Grammar is Not One of the 5 C's

Much like most of you: I love grammar. I love the structure of a sentence and taking it apart. I consider myself to be the "King of Parsing" - I can easily tell you about a word in a particular Latin sentence, giving you everything (and more) about its form and function without even thinking - it just seems to roll off of my tongue. As Latin was taught in a grammar-translation fashion when I was in high school and in college, this is why I loved the subject - it came very natural. NOTE - I am still shocked that I was planning to major in Sports Medicine at UCLA.

I learned this activity at the 2013 Pedagogy Rusticatio, and it is one which i find students either love or hate (meaning, if their team wins, they love the game, but if their team loses, they hate it). The Word Chunk game is a combination of translating sentences aloud into English and trashketball. It is a truly competitive game and can get rather intense depending on your students.


The basics of the game: teams compete to be the first to translate aloud correctly Latin sentences into English. Bob Patrick gave me directions for this game (and Bob got them from Ben Slavic's blog), and with Bob's permission, I post them here.


Directions
This game is both low stress on the teacher (unless students having lots of fun in your classroom stresses you out!) AND while having fun an intense vehicle of language acquisition. It is used with material, a story for example that you have already been working on with students, so I think of this as a Friday kind of activity to review a story, especially with structures or vocabulary that has been challenging. First the set up; then the procedures:
This is a listening and comprehension game. They are “re-reading” old material, which is always good. They are helping each other understand. Because you can focus on certain structures or words, and because you are reading slowly, clearly, over and over again, they are getting multiple repetitions of Latin that they otherwise would not have done on their own. Students swear by how helpful this game is. My problem is not overusing it. - Bob Patrick


Now back to me. Here are my personal observations about the game:
So give it a try - you’ll be surprised both by the results and the fun which you and your students will have.
Posted by Keith at 3:37 PM 3 comments: